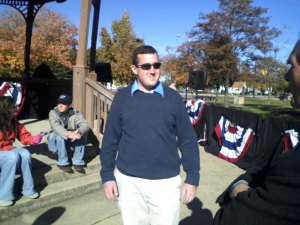 This is a photo of Matthew Old, Erie County GOP Chair, taken in downtown Sandusky’s Washington Park on the day that John McCain and the Straight Talk Express made a Presidential campaign tour stop in Sandusky.

A few months later, at the Erie County Lincoln Day Dinner held last Friday, February 20th, Mr. Old remarked that local Republicans had been excited just to be able to host Senator McCain’s surrogates.  They were suprised when Senator McCain, the candidate himself, made plans to stop in Sandusky.

Are Ohio Republicans demoralized from the election losses in 2006 and 2008?  After seeing the turnout from Sandusky County, Seneca County, and Erie County at recent Lincoln Day Dinners, I’d be inclined to say that interest in participation in the party is on the INCREASE in early 2009.

2009 is an election “off-year,” when low profile local races such as city council, village council, township trustee, municipal court judge, and school board races are decided.  I’ve seen turnout for party functions in other “off-years.”  There may have been complacency on display during those other “off-years,” but this time is different.  What I’ve witnessed so far this year is hunger, and I’m not talking about hunger for food.

Tomorrow night, Tuesday, February 24th, I plan to be at the Cuyahoga County Lincoln Day Dinner, and I’ll be curious to see if the same trend manifests itself there.

At any rate, Matthew Old acknowledged that people in Erie County are seeking out the GOP in greater numbers.  One of the reasons I attended the function (held at the Sandusky Yacht Club, which, by the way, may very well have the most attentive and pampering waitstaff I’ve encountered anywhere) was that one of my mom’s friends, who lives in the city of Huron, was curious about getting involved in the Republican Party.  We thought that accompanying her to the Lincoln Day Dinner would help tremendously in introducing her to like-minded Republicans.  We weren’t disappointed.  In addition to the official Erie County GOP organization, there is also a club for Erie County Republican Women.  Apparently, my mom’s friend represented just the tip of the iceberg, because many new faces had emerged at recent party functions.

The keynote speaker for the evening was the chair of the Ohio Republican Party, Kevin DeWine.  He acknowledged that Republican officeholders in high places had made grave errors of hypocrisy leading to the election defeats of 2006 and 2008.  Our party platform includes principles of small government, balanced budgets, lower taxes, transparency, and ethics.  Yet, we witnessed the biggest expansion of government on the Republicans’ watch, with unbalanced Federal budgets, and closed-door deals that led to ethics scandals.  While Mr. DeWine acknowledged all of these errors, he said that the party must turn toward the future rather than wallow in the past.  I think everyone in attendance was there because we were concerned about the future, not because we were still focused on the past.

Regarding the future, Mr. DeWine said that we need to multiply our party’s membership rather than purge our party’s membership.  I’m inclined to agree.  After all, the name of this blog, Buckeye RINO, is partly a response to those who bandy the “RINO” appellation too freely.  Republicans are supposed to be the big tent party, not the groupthink party.  To be the big tent party, we have to be tolerant of varying opinions on a wide array of topics, though there are some bedrock principles that we all subscribe to.  The party of Lincoln is a party of liberty, not groupthink.

I think alarm over rampant socialism within our own nation is part of the motivation for the increased attendance at these functions.  Another common concern is the feeling that, when it comes to foreign affairs, we need to be every bit as relentless as our adversaries, and, frankly, it appears that our nation may be caving in on many international fronts.

Mr. DeWine said that he fully expected a solid GOP ticket for 9 statewide offices up for grabs in 2010.  While discussing some of the possible names that may appear on the 2010 ballot, he was careful to point out that only Rob Portman had made an official announcement so far.  Portman is seeking the U.S. Senate seat held by Senator George Voinovich, who has announced his retirement.

In one-on-one conversation with Mr. DeWine, I inquired about the ORP’s commitment to campaigning all over the state, not just in southwest Ohio.  Mr. DeWine gave his assurance that winning statewide races requires campaigning in northern Ohio.  What caused me to make such an inquiry?  It was the Secretary of State race in 2006, when Jim Trakas stepped aside to let Greg Hartmann carry the banner for the GOP.  Greg Hartmann was invisible in northern Ohio.  I don’t think we’ll see a repeat of that mistake in 2010.

Also in one-on-one conversation with Mr. DeWine, I asked about the GOP’s competitive disadvantage in early absentee voting.  Northern Ohio Republican candidates have fared much more poorly since absentee voting laws were changed to allow voters to vote early without having to specify a reason why they were choosing to do so.  Mr. DeWine said that many other states have made similar changes, so this is a topic of discussion that’s been brought before Michael Steele and the rest of the RNC.

Two other featured guests at the Erie County Lincoln Day Dinner on Friday night were two state senators:  Senator Karen Gillmor, and Senator Mark Wagoner.  Erie County is located within Senator Wagoner’s state senate district, so he was granted a few minutes to speak from the podium.  Senator Karen Gillmor didn’t speak from the podium, but she did work the room, meeting and greeting guests before dinner was served.

« Carnival #155 is up
Seneca County Treasurers »